You are here: Home>Locations>Kineton>Site of Roman Villa 300m NE of Brookhampton, Kineton. 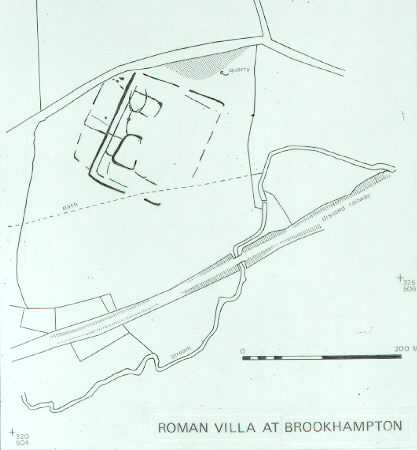 The site of a Roman villa was discovered during a field walking survey. Finds of building stone, hypocaust and roof tiles as well as many pottery sherds were found. Linear features and enclosures are visible on aerial photographs, 500m north east of Butlers Marston.

1 Scatter of Roman pot and tile located during field survey.
2 Field survey in 1984 revealed a dense scatter of worked and unworked stone, tile (flue and roof), pottery, glass etc on the crest of a hill. The dense area of the building scatter is about 20m in length and orientated SW-NE across the hill slope. Two additional stone/tile scatters could indicate additional buildings. The main scatter includes a lot of tile (twelve pieces of flue tile noted), oyster shell, iron and lead objects, a quern and pottery. Pottery included Samian, colour-coated, mortaria, grey, orange and black burnished ware. The site is on a very exposed part of the hill and large chunks of unabraded pot and tile may indicate severe plough damage.
3 Air photographs.
4 Enclosures and linear features show on aerial photographs.
5 Pottery and tile have been collected by Tony McKay.
6 A Roman villa discovered in 1984. The site produced a scatter of roof and hypocaust tile, building stone and other occupation debris. The finds suggest one or perhaps two villa buildings on a ridge top and facingsouth east into a small stream valley.
7 The site was fieldwalked 1985 when a large quantity of occupation debris was recovered.
8 Synopsis of above references.
9 Roman flue and roof tiles, sherds of Severn Valley Ware and colour-coated ware were donated to Warwickshire Museum having been found across this site in 2007.