You are here: Home>Locations>Offchurch>Site of Post Medieval Manor House at Offchurch Bury 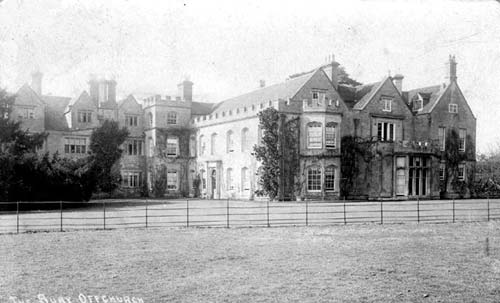 A manor house which dates from the Post Medieval period with extensions added during the 17th century. Two wings of the house were demolished during the 1950s but the central part still stands. It is situated 700m east of Newbold Comyn Park.

1 Information on the manorial history exists from 1267 and the place appears to have been a possession of Coventry Priory, possibly from its foundation. In 1542 the capital messuage was granted to Sir Edmund Knightley. At this date the premises included a chapel (PRN 5241) and burial ground (PRN 2216), a stone dovecote, a lofty hall, a further building and several waters. The house is built of stone, the earlier part, now the servants’ quarters, dating from the time of Henry VIII (1509-47) and retaining many of the original roof timbers. The E front of this wing retains its large stone mullioned and transomed windows and small gables. The N and E portions of the house were probably built in the 17th century.
2 S and E wings pulled down in 1956 and central part replanned as a complete house.