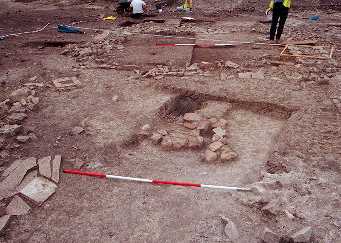 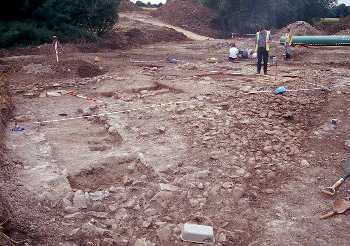 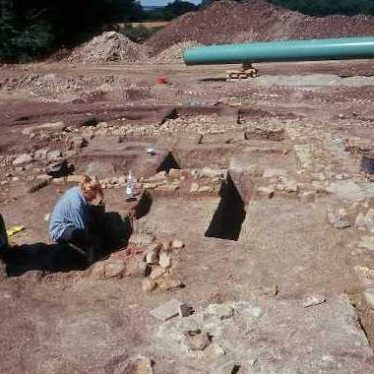 The site of the Medieval deserted settlement of Goldicote. Fragments of Medieval pottery have been recovered from the site and linear features are visible as cropmarks. The site is located 300m south of Park Hill Coppice.

1 Goldicote Park is marked on Saxton’s map of 1579. The demolition of the church was one those complained of in 1638. It appears in Rous’ list of deserted villages. I have not been able to trace the site itself, but there is a prima facie case for Goldicote Park.
2 No archaelogical evidence to be seen (D) – ie site not located. Excellent documentary evidence (1*).
3 C Dyer located the site in 1961. A street with croft boundaries showed up well under cultivation.
4 The site was ploughed last year for the first time in 80 years according to local tradition. Stone roofing tiles and 12th century pottery and one 14th century sherd were found.
5 Finds include five roofing slates.
6 Finds also include further roofing slates, a quern, 83 pieces of Medieval pot, six pieces of clay daub and other objects.
8 The site was ploughed in 1967 and this disturbed much masonry including some large blocks of ‘Banbury’ stone, possibly the foundations of the church (PRN 5180). No surveyable features remain.
9 The field N of the stream is at present under grass. In the lower half of the field adjacent to the stream are some house platforms and one or two hollow ways. No earthworks were visible S of the stream.
11 Air photos show a series of cropmark enclosures N and S of the stream. S of the stream is a possible moated site and fishpond complex (PRN 5181-2). Other enclosures may indicate the crofts of the deserted village.
12 Plan drawn in 1986.
13 Site visit in March 2000 resulted in the recovery of 12 sherds of 12th to 14th century (1100 -1300AD) pottery to the north of the stream. Linear cropmarks were visible on the northern part of the site.
14 Trial trenching followed by area excavation in 2000. Evidence for the form and extent of the settlement was revealed. Included buildings, yard areas, drains and a lane. Main period of occupation 13th and 14th centuries.