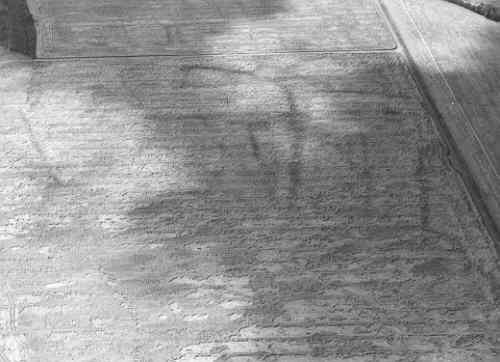 The site of the Medieval deserted settlement of Lower Radbourne. Earthworks are visible on aerial photographs and documentary evidence exists for the village and its depopulation. It is located 2.5km south east of Ladbroke.

1 The site can be identified from the 1845 Tithe Award Map which marks two fields to the N of Chapel Bank as ‘Chapel Field’. The bank seems to have been the church site (PRN 1304). Near the farm are fishponds (PRN 1303). Air photographs show the site to be extensive. Rous records the destruction, and the depopulators appear to have been Catesbys. They presented to the living until 1573, but the church fell down between 1541 and 1544. Dugdale saw only one dwelling there.
2 The village has been under plough for several years.
3 Excellent condition, now under plough (A/P). Excellent documentary evidence (1*).
4 ‘Three shoe boxes’ full of pottery were found by the staff of the East Midlands Electricity Board while digging holes to erect pylons.
6 The site was under plough in the last war and immediately after. It has since been under grass. It was ploughed in 1959 and large quantities of pottery were found. Three areas of possible structures were found.
7 1969: Sherds of Medieval and Roman (PRN 5184) pottery were found during the digging of a trench.
8 ‘Its farmsteads and cottages seem to have been arranged around the sides of an open village green’. This is not visible today.
11 The site has been descheduled.
12 Correspondence from 1959.
13 Correspondence from 1969.
14 Site visit in 1972 unable to identify area of the DMV>.
15 Plan associated with 14.
16 Letter from 1974.
17 Undated record cards.