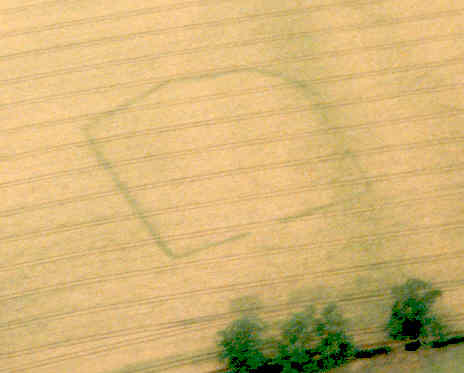 An enclosure, of Roman date, is visible as a cropmark on aerial photographs. The enclosure is situated 500m north west of Broadwell. Trial trenches have been excavated across this enclosure.

1 Enclosure with single entrance clearly visible on an AP.
2 Site fieldwalked, and subsequently rewalked and trial trenched in 1998 by Coventry and District Archaeology Society. Ceramic evidence of RB occupation (C2) recovered by initial fieldwalking.
3 1998 work located enclosure ditch and recovered ceramic and environmental evidence.
4 A report on all work undertaken, to date (2011), on Broadwell. Includes the results of 1997 initial fieldwalk, 1998 trial trenching and fieldwalking, 2001 research excavation and field walk, 2002 fieldwalk and 2004 fieldwalk. Significant quantities of Roman pottery were recovered during fieldwalking. Two small evaluation trenches, followed by two larger trenches were subsequently excavated, one of which recorded the ditch (Trench 2). This was sectioned, and found to be c2m wide, with a depth of c.0.90m. In the other trench, Trench 1, a single posthole was recorded, but the ditch was not encountered. This was taken as indicative of the entraceway of the enclosure.
5 A desk-based assessment and finds report on the artefact assemblage to date from Broadwell, as part of a community project centred on the site. Incroporates a DBA and pottery assessment.
6 Portable Antiquities Scheme find provenance information:
Date found: 2004-03-01T00:00:00Z
Methods of discovery: Metal detector & Fieldwalking