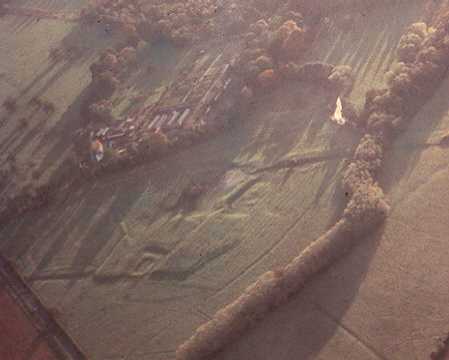 A Medieval/Post Medieval fishpond used for the breeding and storage of fish, for which there is documentary evidence. It survives as an earthwork, and part excavation has uncovered pits and building debris. It is situated at the north east end of Coombe Abbey Park.

1 It is probable that these fishponds can be associated with Combe Abbey in its early stages.
2 Beighton shows them on his map from 1725 so they definately predate “The Great Pool” which was created in the 1770’s.
3 They also appear on an estate map from 1778 but they may not have been the earliest fishponds at the Abbey, as this same map refers to the “Old Pools” at SP4078 (see WA3729, WA3740).
4 The dried out earthworks are still visible.
56 Excavation reported in 1990 revealed dense debris of stone and tiles in the area of the fishpond earthworks. A sequence of 13th century and 14th century dumping was discovered within a pit. A succession of similar pits was discovered and may have been part of the water management system for the fishponds.