You are here: Home>Locations>Coventry>University of Warwick Reaches 50 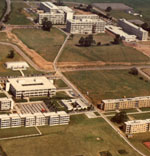 UoW Central Campus 1971
Picture courtesy of the University of Warwick 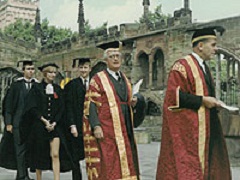 First degree ceremony in Coventry Cathedral, 1968
Picture courtesy of the University of Warwick

The University of Warwick marks its 50th anniversary in 2015. The establishment of the University of Warwick was given approval by the government in 1961 and received its Royal Charter of Incorporation in 1965. It is situated on a large 700-acre campus which straddles the boundary between the City of Coventry and the County of Warwickshire, with a Horticultural Research Centre at Wellesbourne. From the beginning, Warwick has strived to be enterprising and outward-looking, matching academic excellence with relevance.

The idea for a university in Coventry was mooted shortly after the conclusion of the Second World War but it was a partnership of the City and County Councils which brought the University into being on a 400 acre site, jointly granted by the two authorities. Since then, the University has incorporated the former Coventry College of Education in 1978 and has extended its land holdings by the purchase of adjoining farm land.

Archaeology of the site

Warwick’s campus covers 290 hectares of land, and lies in the valley of Canley Brook among the draining red, heavy clay soils. We know that it has been occupied since Neolithic times, and that pottery was made using local clay and charcoal from Tocil Woods. In the Middle Ages it formed part of the royal hunting estate at Stoneleigh, and some of the land was granted by Henry II to Cistercian monks in 1155. After the dissolution of the monasteries in the 16th century, the land was enclosed and took on many of the features evident to this day. The area covers four medieval farmsteads, whose names are still preserved in our modern campus: Tocil, Cryfield, Cryfield Grange and Gibbet Hill1.

The University has grown continuously and now has 20 academic departments and over 50 research centres and institutes and is recognised as one of the best in the country. In 2007, the University achieved the honour of winning the University Challenge series. Notable events also saw President Bill Clinton give his last major policy address on the campus in December 2000.

For the wider public, a major asset of the University is the Warwick Arts Centre, the first phase of which was built in 1974 and was further extended twice in the 1980s. It is home to a concert hall, two theatres, a film theatre, a music centre, the Mead Art Gallery, conference facilities, restaurants and a bookshop. It attracts 280,000 visitors every year to over 2000 events and has a significant national and international reputation.

Events to celebrate the anniversary will be publicised via the ‘Imagining the Future’ web site and another project to tie in with this is Voices of the University: Memories of Warwick, 1965-2015. This is an oral history of those who have studied, worked and lived near the university since its creation and is being carried out by the Institute of Advanced Study, with the completed interviews being archived in the Modern Records Centre.

1 Further information may be found on the University’s archaeological pages.

Many thanks to Elizabeth Morrison of the University’s Modern Records Centre for her assistance in providing the source material for this article.