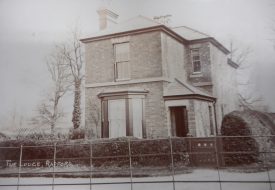 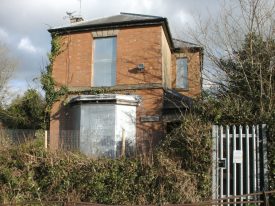 I recently purchased an old postcard of the house I remember from my childhood as where the man who farmed the land behind our house lived. The card is postmarked 27th April 1908 and was signed by an R. A. Rouse. The 1911 census records the residents of the house as Frederick Rouse, who was a chauffeur, and his wife Rose Anna.  So it seems safe to assume that this was the R. A. Rouse who sent the postcard in 1908.

The postcard says it was “The Lodge, Radford” so, judging by its location,  it must have originally been the lodge to Radford House, which was demolished in the late 1960s. Godfrey Close was then built on the site.

This raised the question as to where the main entrance to Radford House actually was. I had always assumed it was off the main village road, now known as Lewis Road and more or less opposite St. Nicholas Road.  This postcard, however, suggests it was actually via the now overgrown track that runs alongside the recreation ground at the top of School Lane / Spring Lane. Unfortunately, none of the maps I consulted made it clear where the main gate was.

Almost as an afterthought I looked at the building regulation plans of the former Warwick Rural District Council now held at the County Record Office.  These include the original plans for the lodge,1 which was built in 1902.  These plans show the lodge was indeed built next to a gateway to Radford House. However, there are also plans for an extension to Radford House itself dating from 1897,2 and these show a gateway out onto what is now Lewis Road.  So again it is not really clear where the main gate was.

I have been unable to locate any photographs of Radford House.  However, there is a note in a book on the history of Radford Semele that says the front of the house looked across the fields to Whitnash and Leamington.  This would seem to confirm that the main entrance to Radford House was reached via School Lane with the entrance on to Lewis Road being the “tradesman’s entrance”.

Radford House disappeared and the site was built on.  The farmland behind my home, along with the Coventry Radiators (CovRad) factory, disappeared under housing in the mid-1970s, so obscuring part of the view across to Leamington. The remainder of the view will disappear when the field in front of the lodge is built on. The lodge is due for demolition in early 2018.