You are here: Home>Locations>Napton-on-the-Hill>Napton on the Hill WWII Observer Post 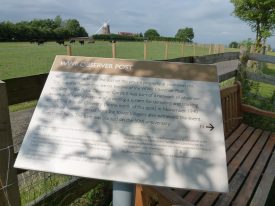 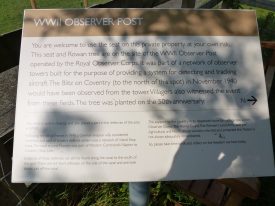 While on a trip to photograph the windmill at Napton on the Hill, I came across a commemorative plaque at the side of the lane about 150 metres from the mill.

Inscription on the Plaque reads

“You are welcome to use the seat on this private property at you own risk. This seat and Rowan tree are on the site of the WWII Observer Post operated by the Royal Observer Corps. It was part of a network of observer towers built for the purpose of providing a system for detecting and tracking aircraft. The Blitz on Coventry (to the north of this spot) in November 1940 would have been observed from the tower. Villagers also witnessed the event from the fields. The Tree was planted on the 50th anniversary.

The Oxford Canal is close by and also played a part in the defences of the area in WWII.

Following the fall of France in 1940 a German invasion was considered imminent and part of Britain’s defence system was a network of Inland Stop Lines. The canal around Napton was part of Western Command’s Napton to Coventry Stop Line.

Evidence of these defences can still be found along the canal to the south of this spot. There are still Stent pillboxes on the side of the canal and anti-tank blocks just off the canal.

The support to this country in its desperate hours by such people as the Observer Corps, The Home Guard, The Women’s Land Army and the Agricultural and Horticultural workers who fed and protected this Nation is not always adequately remembered.

So, please take time to sit and reflect on the freedom we have today.”

The Corps was awarded the title ‘Royal’ by His Majesty King George VI in April 1941. During the Second World War the Royal Observer Corps undertook the long range tracking and reporting of enemy aircraft.