You are here: Home>Locations>Leamington Spa>Moss Agencies, and the Story of a Family MG

Moss Agencies, and the Story of a Family MG 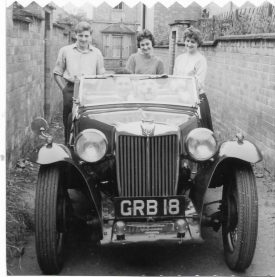 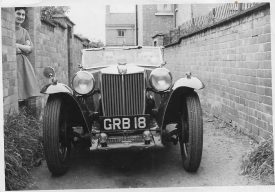 Where the Motoring Centre in Leamington High Street is now, was a company called Moss Agencies. They were a Riley-Morris car dealership. The original building (since gone) was apparently art deco. They had underground storage facilities for cars.

Stored for a long time

The car in the photograph was an MG TB Midget. It was put into storage when its owner, who was in the Royal Naval Volunteer Reserve, was called up for active service in 1940. The garage owner painted it with naval issue battleship grey paint to preserve the bodywork. When the owner returned after the war he did not want it and got another car. So it lay in storage for a long time. By the early 1960s my paternal grandfather was working there. He told my dad about it, who then bought it. Mechanically it was pretty good, but the bodywork obviously needed restoring. So my parents rubbed it right down to the bare metal and my grandfather got it resprayed in British racing green. As can be seen, in the photographs, the family golden retriever liked to go in it (he is in the passenger seat in both photographs!).

Not so much of a family car

By the mid 1960s I had appeared so they sold it to get more of a family car. My dad did manage to sell it at a profit, although sadly the next owner wrote it off (do not worry, the owner was okay!).

Both photographs are taken in the alley behind the terraced houses (which are still there) along Brunswick Street in Leamington Spa. The house number was 81.