You are here: Home>Locations>Leamington Spa>The Social Side of Henry Griffith and Sons

The Social Side of Henry Griffith and Sons 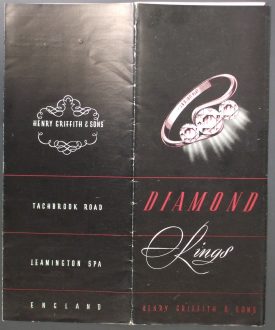 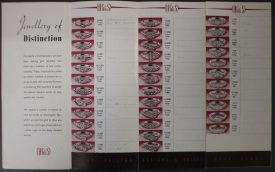 Products of the Jewel Factory

Although gone, “The Jewel Factory” is certainly not forgotten. Its memory lives on not only through the happy memories of us ex-employees, but also through the many items made there over the years (some of which can still be found advertised on various web sites).

This includes things that would not really be classed as jewellery, such a cigarette cases, serviette rings, etc. At one time the firm was one of the leading manufactures of silver thimbles, with “The Spa” thimbles still being much sought after by avid collectors of thimbles. The Jewel Factory also did its bit for the war effort, using the skills of the employees to assemble delicate instruments for aircraft etc. I was told by one of the older employees that they used to have wings of Lancaster bombers being worked on in the factory.

At one time most larger firms tried to help with their workers social wellbeing as well as their working conditions, and the Jewel Factory was no exception. It had its own football and cricket teams that played on the firm’s own sports field, which was along the Tachbrook side of the factory building. Most of this field was sold off in 1963/64 when the Courier Press building was built. The rest of it went around 1980 when The Queensway was finally joined up to Tachbrook Road.

There were also two bowling greens, one fronting the Tachbrook Road and the other down the Leamington side of the factory. These went in 1957/58 when the factory was extended and new driveways were cut through them, and so put an end to the practice by where one of the bosses would send for somebody off the shop floor to go and play a game of bowls, something that apparently happened regularly in the old days.

It was also in the 1960s with the rise of pop groups that a group of employees formed “Purple Porridge” playing cover versions of the latest hits at local dances etc, practicing on the likes of old tea-chests during their lunch hour. Sadly, firms like Henry Griffith and Sons seem to be a thing of the past. True the wages weren’t great but the atmosphere made up for that. This is borne out by the fact that most former employees only have happy memories of their time at “The Jewel Factory”

This is part two of Richard’s memories. The first part can be found by following this link.