You are here: Home>Locations>Coughton>Embroidery and Elephants 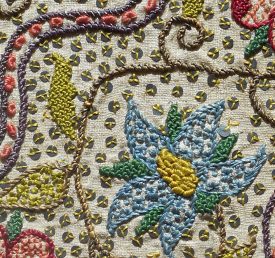 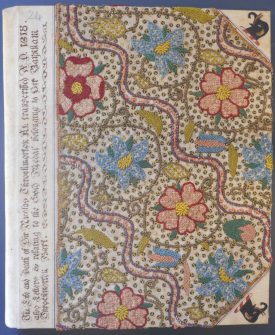 In recent decades, the focus of archivists and conservators has moved beyond the text alone and we have begun to realise the importance and historical value of the book as object. Whereas previously, books with old or damaged covers may have been rebound, we now aim to preserve the original state of the document. There is so much information to be found in these items, beyond what the words tell us.

The text: poem and letters

This document is a bound volume containing a manuscript copy of a rhyming memoir, entitled The Life and Death of Sir Nicholas Throckmorton (born c.1516, died 1571). The poem is written from the perspective of Sir Nicholas’ ghost and the authorship is uncertain.1 The book cover states that the poem was ‘transcribed A.D. 1618’, but our catalogue dates this particular document to 1718. The text of the poem takes a flexible approach to historical facts and dates, but has been used by various historians as an interesting commentary on the events of the reformation.2

Also bound with the poem are letters and an account of the small gold medal of Charles I found in the coffin of Sir Baynham Throckmorton at Bristol, 1852. These letters are dated c.1855.

The object: binding and embroidery

The most eye-catching aspect of this document is the binding. The book is bound in vellum with embroidered covers, a handwritten title and painted elephant motifs in the corners. Embroidery has been used to bind books for many centuries, with the earliest example dating back to the 14th century2.  The majority of embroidered bindings were made in the 16th and 17th centuries. They were never mass-produced, and each example is unique and personal3.  The embroidery would be produced separately, and then glued or stitched to the pre-bound book. They could be created by professionals on request or by individuals for their own use.

In this example, the embroidery may well be older than the binding, possibly dating to the 17th century. From its size and shape, it looks as though it may have been originally produced to cover a different, smaller book. It is certainly a beautiful piece of work, which must have been quite time consuming to produce. It is decorated with sequins and stitches including stem stitch, whipped stem stitch, star stitch, trellis stitch and bullion stitch.

This object was created in stages and each element tells us something new. The poem was composed at one time, later copied out and bound at another. The letters and accounts of the gold medal, likewise, have a history prior to their inclusion in the volume. The embroidery was created separately from the rest of the binding, and the elephant artwork seems to have been added to complement the embroidery.

The decision to combine each of these elements – the poem, letters, artwork and embroidery – says something about the owner’s motivations, and the meaning of each piece. To the historian, this book is certainly worth more than the sum of its parts.

This article is October’s Document of the Month for the Warwickshire County Record Office. Further articles can be found on their website