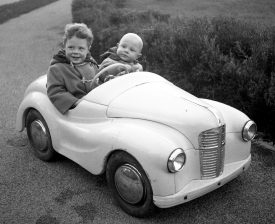 Taking my brother for a spin in my Austin J40 pedal car, now missing its fenders and hood ornament
Image courtesy of Jonathan Kinghorn 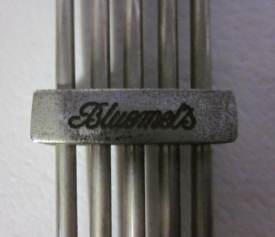 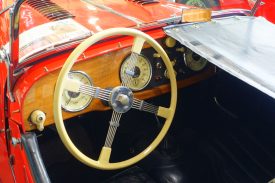 I got my first vehicle when I was about five – an Austin J40 pedal. I loved its cream steering wheel with chrome spokes (oh so very 50s!) and that likely explains why I sought a Morgan with a Brooklands steering wheel. What is it that makes this iconic accessory so special?

Until 1933 Brooklands was the UK’s only mainland circuit and its name was synonymous with British motor racing. Unfortunately, the site’s subsidence and the circuit’s rapid construction using un-reinforced concrete created a notoriously flawed road surface. Away from main highways, road surfaces in the UK could be pretty awful too – and on January 1, 1930 the speed limit outside built-up areas was abolished!

Frank Ashby & Sons, Ltd., originally a cycling accessories manufacturer, came to the aid of sporting drivers and regular motorists alike offering a sprung steering wheel that would afford some relief from incessant jarring and vibration. Ashby didn’t invent the sprung steering wheel concept, but did seem to have introduced rubber and spokes comprised of rods. Because of its strength, flexibility, and good looks, the Ashby wheel was soon widely used in British sports cars in the 1930s, including Series 1 Morgan 4-4s.

Post-war production of Brooklands wheels, however, was dominated by another manufacturer. Three Bluemel brothers began making walking stick and umbrella handles in East London in 1860. When the cycling craze hit they developed a wide range of accessories and in 1904 they relocated to Wolston in Warwickshire, about five miles southeast of Coventry, the heart of the British cycle industry, and later of the motor trade. The Boys Own Annual noted in 1910 that “The name Bluemel is synonymous with all good things in celluloid, and their articles are always neat and of first-class workmanship.” It wasn’t long before Bluemels were making parts for cars and motorcycles too.

After the retirement of the original brothers, a second generation continued to expand the company. By 1938 they were making things like bicycle fenders and gear cases moulded in a Bakelite-like celluloid. Other products included small-change bowls for the UK Post Office and patent baby carriage handles, but they were best-known for their bicycle pumps and car steering wheels. Bluemels supplied steering wheels for the MG TB and TC, for example, and made copies of Ashby’s “Brooklands” model.

I have not been able to ascertain how early they started to produce their Brooklands wheels. They appear to have been licensed under Ashby’s patent but were a superior product; the spokes were of stainless steel with square section chromed brass spacers, one of which featured the Bluemels logo – framed by the 1950s in baby blue cloisonné enamel. Several sizes were produced, and rims were black, cream, or marbled cream/ brown, with finger grips. Their drawback is that over many years the rims generally shrink a little and crack.

The Bluemels Brooklands wheel was an extremely popular optional extra for Morgans in the 1950s. But with smoother roads and sleeker cars it was démodé by the early 1960s as wood-rimmed three spoke wheels caught the mood for modernity. Not to be left behind, Bluemels responded with an up-to-date three-spoke banjo wheel named for the grand prix circuit at Silverstone. Other post-war products included parts for Jaguar, Austin Martin, Rolls Royce, and Bentley, as well as plastic mouldings, dials, nameplates, and license plates.

Nevertheless, by 1983 Bluemels was virtually bankrupt. The firm was acquired by a German bicycle accessory manufacturer, which took what it wanted from the Wolston works two years later and still markets plastic bike fenders using the Bluemels name. Fortunately, the tooling for the Brooklands wheel was acquired by John Kimble, who manufactures parts for classic cars in Dartmouth, Devon. Today, Kimble Engineering produces Bluemels Brooklands wheels with black or cream resin rims in several sizes for supply to the trade using that original tooling; other makers have reproduced Ashby wheels. The Brooklands steering wheel still works as well as ever, and it looks perfectly at home in a traditional Morgan. I wouldn’t be without mine.

This is an abridged version of an article originally published in The Morganeer ( the Morgan 3/4 Group club magazine) vol. 42, issue 4. July – August 2019.