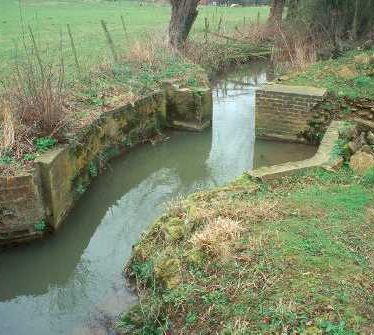 A sheep dip at Sutton under Brailes
Warwickshire County Council 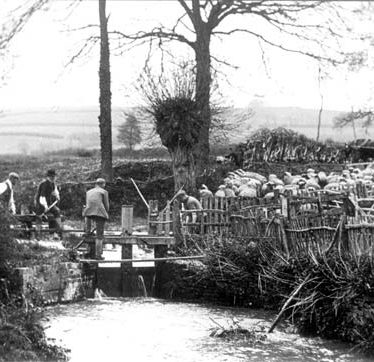 The site of a sheep wash of unknown date. The sheep wash survives as a brick structure. It is situated 200m south east of The Green at Sutton-under-Brailes.

1 Brick-lined sheep wash with walling, water and platform area visible. The brickwork is dilapidated in places.
2 Fed by Sutton Brook (stream) 10% Cotswold stone, 90% Brick, Partially silted up at time of recording (4/10/2001). 6 meter long splayed retaining walls above the upstream sluice contained the reservoir of water when the sluice gates were in place. Substantial brick abutments held the timber sluice gates. Water flowed over the gate down spillways then cascaded over the sheep as they were moved across and in front of the sluice gate. They were kept close to the sluice gate by a timber fence (remains still present) in the sheepwash. Sheep then left by an exit ramp on the southern side. Water was held in the sheepwash by the downstream sluice gate that was held in palce by brick abutments (only the base of the southern abutment remains). 3.5 meter splayed retaining walls tie the downstream sluice abutments back into the bank. Only the base of the southern retaining wall remains. Photographs taken in 1920’s and 30’s show details of sluices and mode of operation. No remaining associated structures. Last usage in 1940’s. Thought to have been built 19th Century (oral report).
3 Watching brief and archaeological recording were carried out by Bath Archaeological Trust from December 2002 to February 2003 during restoration works to the sheepwash. Earlier local limestone construction was revealed behind the brickwork of the sheepwash but with no dating evidence. It has been suggested that the sheepwash may have origins earlier than the 19th century due to the village being medieval in origin, the road adjaent to the sheepwash probably also being of medieval origin and the stone built predecessor to the brick sheepwash having signs of repairs within the stonework suggesting longevity of use.