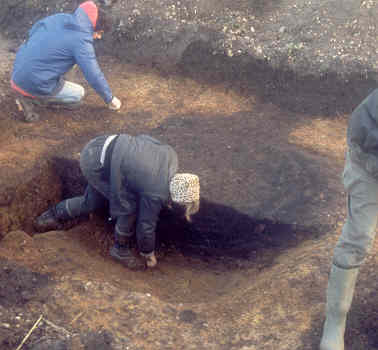 Excavation of one of the pits in a Prehistoric pit alignment, Church Lawford
Warwickshire County Council
Description of this historic site

A Prehistoric pit alignment was found during an archaeological excavation. The pit alignment is also visible as a cropmark on aerial photographs. It was situated at Ling Hall quarry, Church Lawford.

1 Linear feature and a pit alignment shown on air photo.
2 Watching brief carried out by Warwickshire Museum exposed two cropmark pit alignments. Both alignments intersected or were intersected by a previously unknown double row of postholes.
3 Probably Iron Age.
4 A fifth year of observation took place in 1996. Further pits in the alignment were examined. Groups of undated pits were also excavated on the E side of the site and are believed to relate to the unenclosed Iron Age settlement.
5 Date revised to between the late Bronze Age and the late Iron Age.