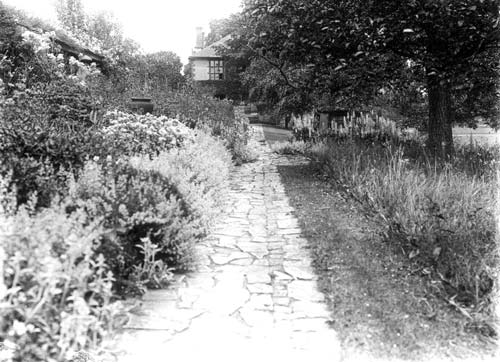 A view of the gardens at Avonside House, Bidford upon Avon
Warwickshire County Council
Description of this historic site

The gardens of Avonside House, which were created between the First and Second World Wars. The gardens have now been divided up, but are located to the south of Grange Road, Bidford on Avon.

1 Riverside pleasure grounds with mixed planting and walks and kitchen garden. In the 1930s was the home of Muriel Marston (wife of Dr HMC Crawford) who wrote two books describing her garden making here.

2 Avonside House is a fine example of the arts and crafts building tradition, but the site’s interest is principally as a particularly well documented inter-war garden. The house was bought by Dr and Mrs HML Crawford after the First World War, and in the 1930s, Mrs Crawford (aka Muriel Marston) published three well-illustrated books describing the gardens created at Avonside. Features documented in these books and still surviving in the mid 1980s include: a stone paved terrace, loggia, topiary, dry stone planted walls, a fruit tree walk and a rose garden. The site has since been divided, but despite some inappropriate additions retains much of its character.
Lovie recommends the site be inspected with a view to granting Listed Building Status to house and contemporary structural elements. He also recommends the site should be included on the Local List as a key site; and states that the site might be appropriate for future consideration for inclusion on the Register as an unusally well-documented example of an inter-War garden in the Arts and Crafts tradition.

4 Information from descendant of Mrs Crawford. She wrote under the name Muriel Marston, but her name was Muriel Marie Margaret Crawford. She used her husband’s middle name of Marston as her pen name. Under her pen name, she wrote 3 books about her garden – “A Garden by the Avon”, “Who Loves a Garden” and “Garden Magic”. The house “Avonside” was extended and redesigned by Baillie Scott.