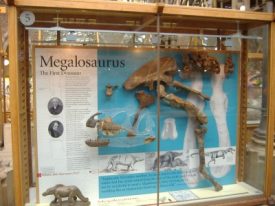 Jurassic Megalosaurus. This photo shows the remains of a similar species of dinosaur of similar age in the Oxford University Museum of Natural History.
Jon Radley 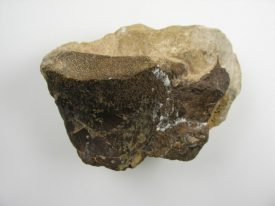 Vertebra of new Warwickshire dinosaur. The remains from southern Warwickshire include fragments of limb bones, vertebrae, and elements of the pelvis.
(Warwickshire Museum Collection)

True dinosaurs – land-dwelling ruling reptiles of the Mesozoic Era –  are quite widespread in Great Britain, and more are being discovered all the time. In Warwickshire,  our widespread Jurassic rocks formed as mud and sand layers in warm, shallow seas. Because of this, most of the fossils that we find are of sea creatures, though occasionally, fragmentary remains of dinosaurs are found.

The story began 170 million years ago when the carcass of a Megalosaurus-like carnivorous dinosaur was washed up on a subtropical beach over what is now southern Warwickshire. The bones were covered by layers of shelly sand which eventually became deeply buried and hardened into limestone layers. Millions of years later, the limestone rock beds were revealed at the land’s surface, as the modern landscape slowly emerged. There they remained until the 1960s, when a number of the shattered bones were dug up in a local quarry.

For several decades the rock fragments and the bones  were cared for by Birmingham Museums and Art Gallery. A few years ago they were returned ‘home’ to Warwickshire where they have undergone detailed scientific investigation and documentation. Eventually, a selection of the bones will go on display at the museum.

The finds are some of the most important dinosaur remains to have been discovered in the United Kingdom in recent years. We now know that they represent a completely new species of dinosaur – a meat-eater that has been named Cruxicheiros newmanorum. ‘Cruxicheiros‘ (pronounced Croos-i-ky-ros) means ‘Cross Hand’ in Latin and Greek and is named after the disused quarry site where the bones were discovered. ‘Newmanorum’ refers to the Newman family, on whose land the bones were found.