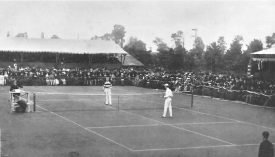 William (left?) and Ernest Renshaw, playing a match at the Wimbledon Championships 1883
Originally uploaded to Wikipedia 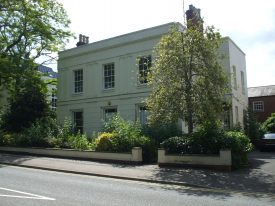 William and Ernest Renshaw (b. Jan. 3, 1861, Brandon Parade, Royal Leamington Spa) dominated the All England Croquet and Lawn Tennis Club’s tournament in Wimbledon during the 1880s and are credited with transforming tennis into a spectator sport.

The Renshaws entered the 1879 All England tennis championships but, somewhat daunted by the crowd, they elected to watch and learn rather than play. Their début on court at the championships came in 1880, when Willie was beaten in the second round and Ernest reached round three. Thereafter followed a period of unprecedented success.

A new style of play, and unprecedented success

The Renshaws introduced fast serves and volleyed returns to a game which up to that point, had been played almost exclusively from the baseline. Players adopted either the heavily-‘cut’ real tennis shot – or the wristy flicks of rackets. By way of contrast, the Renshaws developed a distinctively different style, intercepting early with volleys and smashes. Willie was forceful, determined and athletic; Ernest: measured, stylishly graceful, and mannered. By sending one player up at the net to intercept and volley, they turned doubles play on its head. Their brisk serve-and-volley playing style, which became known as the “Renshaw Rush”, confounded opponents and held the audience in thrall.

Willie won twelve Wimbledon titles – seven of which were singles, a record bettered only by Roger Federer. The first six Singles titles, though, were consecutive (1881-6) – an achievement which has yet to be equalled. This said, the five successive wins of Björn Borg and Roger Federer respectively are considered the ‘modern’ record; in Renshaw’s day, the reigning champion was granted automatic entry to the following year’s final.

Willie defeated his brother Ernest in the 1882 and 1883 finals. In 1886, Willie developed tennis elbow and while he rested, brother Ernest took up the slack: he was runner-up in 1887, then went on to win in 1888. In 1889, Willie returned and prevailed over Ernest in the final to take his seventh singles title. Together they took the British Doubles Championship seven times.

In 1888, William was elected the first President of the British Lawn Tennis Association.

The last appearance of a Renshaw at Wimbledon was in 1893, when the twins were drawn to play each other in the first round. Willie withdrew in favour of his younger brother, who lost in the subsequent round.

Ernest Renshaw died on 2 September 1899 at The Grange, Waltham St Lawrence, near Twyford, Berkshire, having ingested spirits of carbolic acid. The subsequent inquest found no evidence to suggest that it had been taken intentionally. Described as ‘a gentleman of independent means’, Willie Renshaw died at Swanage, Dorset, on 12 August 1904, following epileptic convulsions. Neither twin married.

In 1905, the Renshaw family presented the All-England Club with a trophy – The Renshaw Cup – for any winner of the Wimbledon Men’s Singles All Comers Final, who then went on to play the champion of the previous year in the Challenge Round for the title. This practice ceased in 1922, since when the reigning champions have had to play in the main draw. After 1922, the cup was awarded to the Men’s Singles Champion – who thus received two trophies.

From Elkington and Co. – makers of the plate for the Wimbledon Women’s Singles Championship – The Renshaw Cup features a player with wings on his back and heels, holding aloft a cup. In 2006, Christies sold Fred Perry’s 1936 Renshaw Cup trophy for £31,200.

This article was previously published on the Leamington Tennis Court Club’s website, and is reproduced with the author’s permission.