You are here: Home>Locations>Wishaw>Golf at The Belfry: The Ryder Cup

Golf at The Belfry: The Ryder Cup 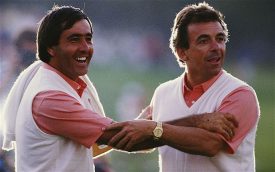 Paul McGinley at the Ryder Cup, 2002
Photo courtesy of The Belfry

By 1985, The Belfry was ready to host the Ryder Cup. This was the ultimate test for the Brabazon course and it passed with flying colours, as Lee Trevino’s United States team was beaten by Europe, led by Tony Jacklin, for the first time since 1957. Sam Torrance created an iconic moment when he rolled in a 20 foot putt for a birdie, giving Europe victory by 16.5 points to 11.5. The attendance of 90,000 compared to 16,000 at Walton Heath in 1981.

Tony Jacklin captained the European team for the fourth and final time in 1989, when the Ryder Cup was again held at The Belfry. By now, two new lakes had been created and mounds built to make viewing easier for the many thousands attending the event. The European team started as favourites, but Raymond Floyd and his US team forced a tie for only the second time in the history of the Ryder Cup. As holders, Europe retained the trophy.

The Belfry made history in 1993, when it hosted the Ryder Cup for the third time. The teams, led by Bernard Gallagher and Tom Watson, entered the final day singles with Europe having a single point advantage, thanks to Nick Faldo, but Sam Torrance was injured. Nick halved his singles match with Paul Azinger, with a hole-in-one at the 14th helping him on the way. However, the US team charged back, with the 51-year-old Ray Floyd delivering the crucial point in his defeat of Jose Maria Olazabal.

In 2002, as the tournament had been postponed for a year following the Sept 11th attacks in 2001, the teams were once again at The Belfry for a record fourth time. Sam Torrance’s Europe took on Curtis Strange’s American team, with Sam gambling by putting out his best players first on the final day.

An inspired Colin Montgomerie led the way and with help from Welsh rookie Philip Price, who beat the mighty Phil Mickelson, the Europeans had a convincing win over the US, with a score of 15.5 to 11.5, the largest margin since 1985. Paul McGinley holed the winning putt, triggering extravagant celebrations, with Paul ending up in the lake at the front of the green.

To date, The Belfry is the only venue to have hosted the Ryder Cup four times and in 2013 was named “Best venue – the ultimate UK golf experience”.

This article is continued from part one, and is compiled from material on The Belfry website, with thanks to Jade Rathbone at The Belfry, who provided the photos and permission to use the text.