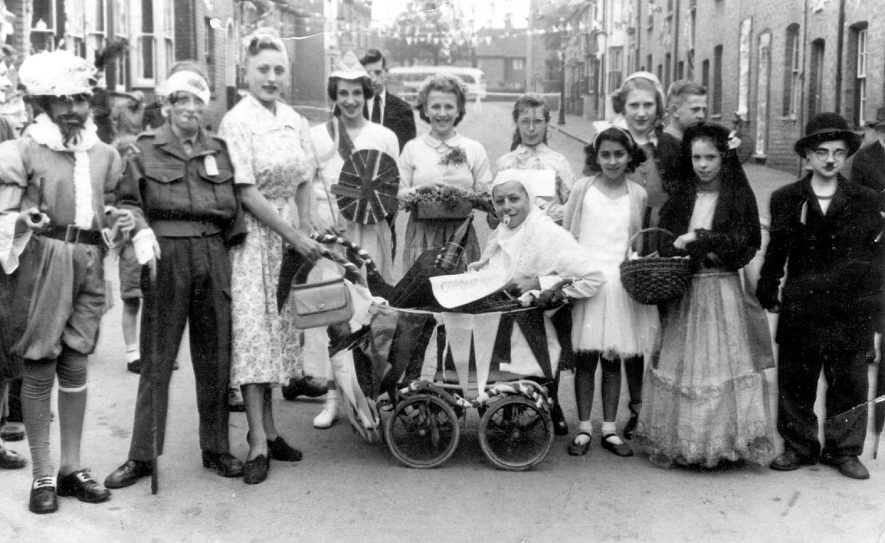 Fancy dress coronation celebrations in Shrubland Street, Leamington Spa. Left-right. Dave Neale, Tony Walters, John Walters, Brian Bugg, Margaret Bugg. John French in pram, Graham Bicknell as Charlie Chaplin. 1953 [It has been pointed out that these celebrations were in St John's Road and fourth from the right with the white hat is Beryl Jean Parker] [It has been further pointed out that this photgraph was taken in Shrubland Street and not St Johns Road. The girl next to the pram in a ballet dress is Linda Bricknell. The girl at the back (?Brittania) is Janet Thompson, the flower girl next to her is Margaret Bastock and the girl between Margaret and Linda is Mavis Usher.]
IMAGE LOCATION: (Warwickshire County Record Office) PEOPLE IN PHOTO: Walters, Tony, Walters as a surname, Neale, Dave, Neale as a surname, French, John, French as a surname, Bugg, Margaret, Bugg, Brian, Bugg as a surname, Bicknell, Graham, Bicknell as a surname
Reference: PH(D), 921/21, img: 7458
This image is subject to copyright restrictions. Please see our copyright statement for further details.
Map marker in the right place? If not, please correct the map.
Locations
Leamington Spa (1340)
Subjects
Royal Celebrations (141)
Visits From Royalty and Major Dignitaries (137)
Date