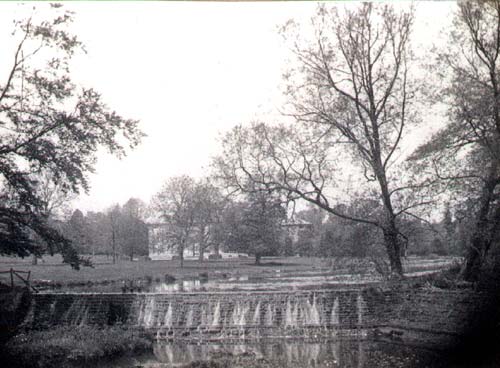 A view of the landscape park at Wootton Hall, Wootton Wawen
Warwickshire County Council
Description of this historic site

The site of Wootton Hall Park, a landscape park dating to the Post Medieval period. Features of the park include an icehouse, a lake, an orchard and drive. It is situated north of Wootton Wawen. Recommended Review Register entry by Lovie.

1 An early 18th century landscape park, lake and woodland, 20ha, surrounding Wootton Hall. The River Alne runs southwards along east boundary from the east of the Hall to Wootton Bridge, feeding the artificial lake. The approach through the park is via an avenue of trees from the south west. An ice house is located near the south west corner of Wootton Pool to the north of the park.
2 House 1687, renovated early 20th century. 18th/ 19th century landscape had arts and crafts garden added c1908 (photos exist). Features include pleasure grounds, canal/ river, pond, drive, orchard, kitchen garden, parkland with lake, wilderness, icehouse (demolished). House now flats.
3 Not a well documented site, but there is evidence to suggest the existence of a significant early 18th century landscape here. Considerable work was undertaken 1904-1912, for George Capewell-Hughes. This included the creation of an arts and crafts garden with pergolas [illus], and walled formal garden with central dipping well. It is not clear which elements of these gardens survive.
4 – 5 The OS 1:10560 1886 Sht Warks 31SE/37NE show the gardens and features such as the pool, wilderness, boat house and ice house. The extent of the parkland is not clearly indicated.
6 Greenwood’s map indicates an approximate extent for the park in the early 19th century.
7 No longer on RPG list. Confirmed by Stratford District Council 23/11/2001.