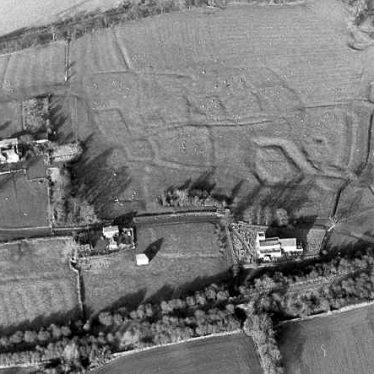 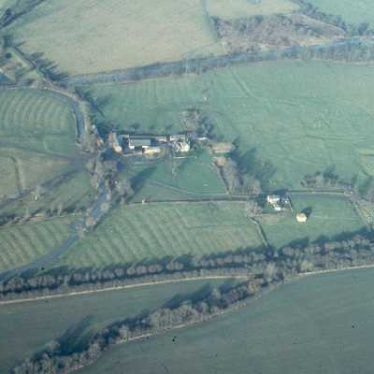 The site of Wolfhampcote Medieval deserted settlement. There is documentary evidence for its existence and abandonment by the 16th century. Aerial photographs and part excavation, suggest a moat, a hollow way, fishponds, buildings.

1 In 1501 there was an enclosure and the 1517 Inquiry described the village as in ruinam positam. In the early 17th century the vicarage was rebuilt and in 1641 arable cultivation was resumed. The village did not recover and now consists of a church, three cottages and two modern houses. The site of the former village can be seen in fields N of the church.
2 Very good pattern of roads and crofts, but no house sites visible (A). Excellent documentary evidence for existence and desertion of village (1*).
3 1955: An area 48.8m by 30.4m was chosen for excavation. Trial holes 1.2m square were dug at 3.6m intervals. These produced 11th to 15th century pottery, traces of banks, a hearth and occupation layer. A further area 7.3 by 3.6m was excavated and further traces of structures uncovered. Finds included pottery, spindle whorls, a bone shuttle, knives, whetstones, buckle buttons, pins, a Roman coin (MWA5363) and a silver sixpence of James I. A section was also dug across the main hollow way indicating a clay road surface.
4 Under pasture and in a fair state of preservation. It comprises the usual derelict roads, enclosures and building steads. A large irregular enclosure is probably a moat (MWA5365). Some 80m NE of this is a probable fishpond (MWA5364).
6 A survey of Wolfhampcote was conducted by the RCHME in 1981.
9 Aerial photographs.
10 Four Digital Photographs taken June 2007.
11 Revision of the schedule.
12 Synopsis of the excavation in 1955. See 3.
13 Letter relating to the DMVRG report.
14 Plan of the medieval village.
15 Plan from aerial photographs.