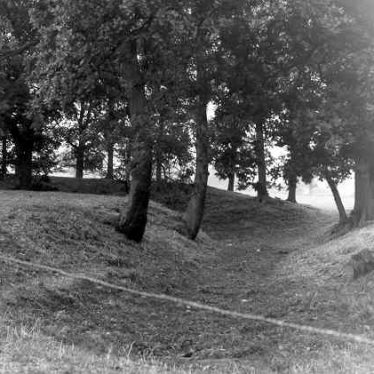 Wike moat, a wide ditch usually surrounding a building. Of Medieval date it is visible as an earthwork, and shows up on aerial photographs. It is situated 350m south of Watching Hill Spinney, Coughton.

1 A rectangular earthwork called Wike Moat. This, which is probably the site of the house of the de Coctuns and de Bruylys, stands on the S side of a lane about half a mile to the W of Coughton village and is crossed by a private lane to Coughton Lodge. The moat is dry but deeply scarped, with a bank on the N side and a short bank on the S, E of the roadway. The W half of the S side is flattened out.
2 The moat is unusual in that it is strongly banked outside the ditch. The E half is at present water-filled but this apparently is not normal.
4 The enclosure banks are up to 2m high and 3m wide. The moated ditch is 7m wide and 2m deep.
5 Water filled on all 4 sides.
6 A moat 2.6m deep with an external bank piled up a further 1.3 to 1.9m, but no internal bank whatsoever; the reason for this is difficult to see, unless the moat was dug around a pre-existing enclosure which, being in use at the time, offered no dumping space for the upcast inside.
7 Photographed in 1978.