You are here: Home>Locations>Tysoe>Tysoe Windmill 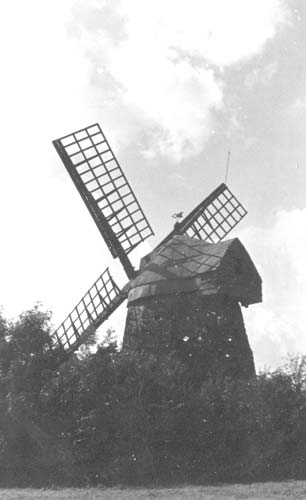 Tysoe Windmill which was built during the Imperial period. It may stand on the site of a Medieval windmill. It is situated on Windmill Hill.

1 A little to the W of Lower Tysoe is a windmill, possibly on the site of the one which is mentioned in the 14th century and 15th century.
2 Tower mill. Restored and in good condition. Twelve-sided stone tower with batter and barrel-shaped; four common sails, aluminium-covered conical cap with finial and tail projection for winding gear. Two pairs of stones and all machinery. Three storey. On top of Windmill Hill at 197m. Early 18th century. Ceased work after lightning strike 1915. New sails 1935. Partial restoration 1951. Further restoration 1968-75.
3 An eight-sided stone tower mill.
5 Listing Description.
6 Correspondence from 1971.
7 Note from 1983.