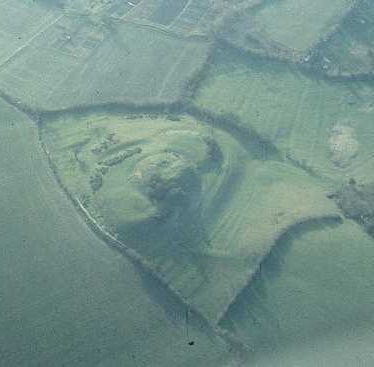 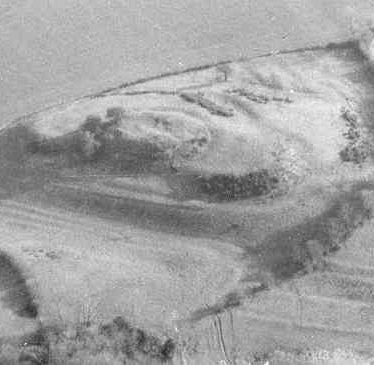 Castle Hill, a Medieval motte and bailey castle. The remains of the castle motte are visible as an earthwork. The site is located 200m west of Castle Hill Lane, Upper Brailes.

1 At a height of nearly 152m in the village of Upper Brailes, is a detached artificial mount, surrounded by entrenchments, called ‘Castle Hill’. The site is commanding. The present remains are evidently much worn and altered and consist mainly of a central mount, which has a flat top some 9 to 27.5m in diameter; this mount is surrounded by earthworks in the form of an irregular oval, beyond these again are further banks encircling the area on three sides, but absent towards the E. The entire works cover almost 1.25 ha. The site is probably a fortified manor or castle.
3 OS card.
2 Formed from a natural hill which was somewhat shaped. The mound is much weakened and worn and there is a hollow in the middle of the W side. Instead of a bailey there is a crescent-shaped platform. Brailes was part of the domain of Robert Newburgh, Earl of Warwick, and it is likely that the mound, with a timber tower on top, was constructed by him. It probably had only a short life as a castle.
5 Monument is rough grass used for cattle grazing which has worn scarps in the side of the mound exposing subsoil.
6 Plan.
7 Revision of scheduling 1999.
8 Correspondence with Brailes P.C.
9 Letter from EH about the site.
10 Notification from EH of a management agreement for 1990-1995.