You are here: Home>Locations>Ansley>Remains of House 100m S of Monwode Lea Farm, Ansley. 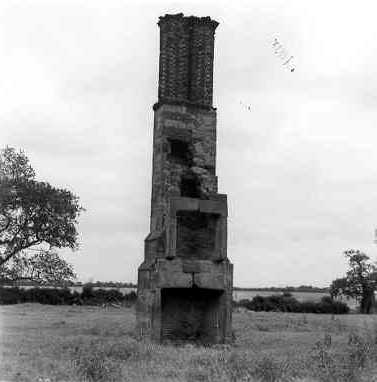 The site of a house, which dates to the Post Medieval period, lies 400m south west of Monwode Lea.

1 S of Monwood Lea Farm stands an isolated late 16th century chimney stack of red sandstone with two square shafts of brick with V-shaped pilasters. An arched stone fireplace to each floor survives. Not a trace of the remainder of the house is visible, and it must have been destroyed a long time ago.
2 Excavated in 1962 by Nuneaton Museum. The chimney is of Stuart period, but the stonework is possibly as early as the 14th century. The final occupation level is of the time of Queen Anne (1702-14). A building here is mentioned in Warwickshire records as early as 13th century. Stone house cottage to the SW is 19th century and may incorporate some stonework from this building.
3 A toll gate cottage was constructed in 1762 incorporating material, including a gable end, from this house.
4 The house is shown on the map and appears to be slightly cruciform. This may indicate that it had projecting gables on each long side.
5 Photographed in 1977.
6 Archival correspondence.