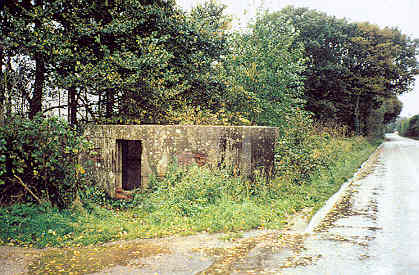 A Second World War hexagonal pillbox, associated with the airfield near Long Lawford. The pillbox is situated on Lawford Heath Lane.

1 A pill box stands beside Lawford Heath Lane. It is standard, of grey concrete; the windows and entry have now been blocked up with brick.
2 A semi sunken concrete pillbox alongside Lawford Heath Lane. The entrance and embrasures have been partly bricked up. The steps, or slope, leading to the entrance has been filled in. Unusually no evidence of a wall to protect the entrance from gunfire etc can be seen. The pillbox has a quality of workmanship, details and features not found elsewhere.
3 Hexagonal type 22 pillbox with two doors on the airfield side in corners and a projecting bay between them. The interior has an unusual anti-ricochet wall which flares out from the floor up. The walls near the doorways retain traces of sand and earth coloured paint. The loopholes may have been bricked up later in the war when it was desirable to have as few as possible. This pillbox is probably unique.