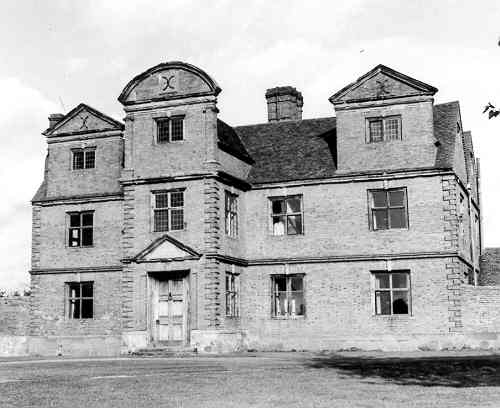 1 1679: A rectangular brick house of two storeys, and attics, probably embodying an earlier timber framed structure. It comprises two parallel gabled ranges with a porch wing on the south. Stone plinths, moulded brick string course and rusticated angle dressings. The three storeyed porch has an oak framed entrance with a flat arch, a moulded keyblock and a stone cornice and pediment. Three dormer windows were added c.1700. Central stacks with square pilasters. The sides have enriched rainwater heads dated 1679. The house contains late 17th century enriched ceilings and fireplaces. The north court retains original walls on three sides, and in the NE angle is the dovecote (See WA 405). The small west court retains south and west brick walls pierced with oval stone openings with keyblocks.
2 Rectangular plan, facing south. Flemish bond, red brick.
3 The cellars are of a different plan to the house.
4 The house does not appear to have been moated. Lord Aylesford maintains that the pond south of the hall was in fact constructed by himself to drain some marshy ground.
5 Photo of the house frontage.
6 Possibly used as a temporary residence of the Fishers while the main house was being repaired or rebuilt in the later C17. Building may be of C16 origin.