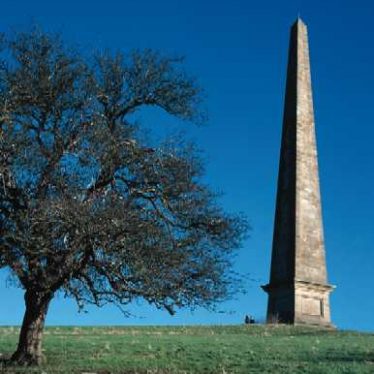 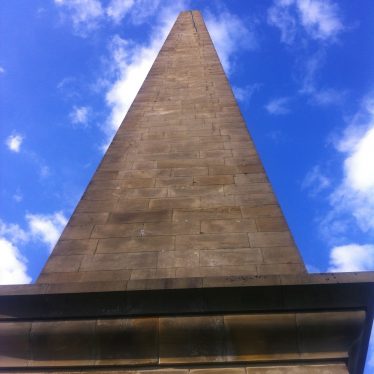 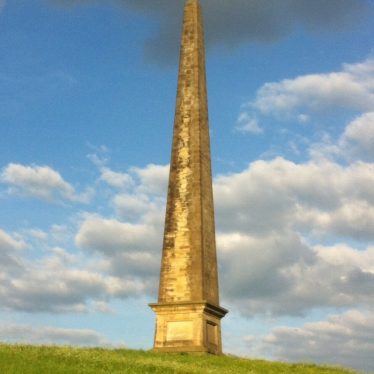 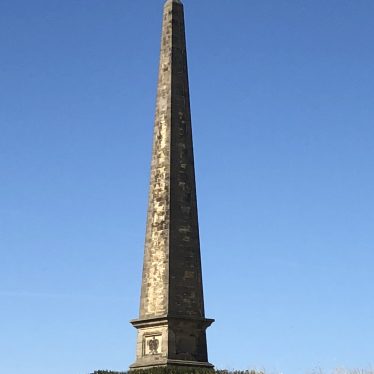 An obelisk which was erected in 1876 on the Welcombe Estate by Robert Needham Philips to commemorate his brother, Mark and father, Robert. It is situated 400m north of Temple Hill.

1 An obelisk forms a prominent landmark on the Welcombe Hills. This was erected to commemorate Mark Philips who owned the Welcombe estate and died in 1873. The obelisk was erected by his brother and heir in 1876.
2 Obelisk. Erected 1876. It cost £4000.
3 Listed Grade II. Erected in 1876 to the memory of Mark Philips of Welcombe. Limestone ashlar. 3 square steps to battered pedestal supporting obelisk with pronounced taper. Pedestal has Philips Arms to east; inscription to Mark Philips to west; north and south faces have inscriptions to Robert Philips, 1760-1844, and Robert Needham Philips, 1815-90, Mark Philips’s father and brother. Mark Philips, 1800-73, was an important politician, one of the first pair of MPs for Manchester, 1832.
4 The obelisk is said to be of Welsh granite, though clearly 2 kinds of sandstone. 120ft/37metres high. Three sides of the pedestal have plaques inscribed with details of the 2 men’s achievements, and the fourth side has the family coat of arms. Page 41 has photographs of the obelisk and of the family coat of arms. Pages 40-41 details the men’s achievements and lives. Mark bought the Welcombe estate in 1845, retired from politics in 1847, demolished the Welcombe house and continue to live in Snitterfield. A house was finally completed on the estate in 1869. Following Mark’s death in 1873, his brother Robert erected the obelisk at a cost of £7,000. Robert died in 1890 and his euology was added to the southeast side of the obelisk.