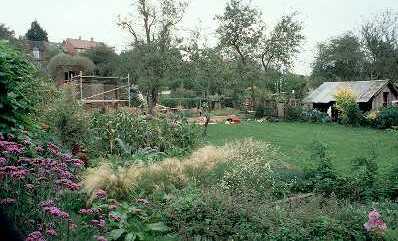 The remains of Hill Close Pleasure Gardens which date to the Imperial period. A reduced area of the gardens survives, together with some original features. It is situated to the south of Linen Street, Warwick. Recommendation by Lovie to review Register entry.

1 The close was first divided around 1846, by 1851 the eastern portion had been divided up with a service lane and plots on either side. By 1866 the divisions into gardens had been completed. In the earlier 20th century plots on the south side of Linen Street, St Pauls Close and St Pauls Terrace were built on, stables were built on part of the garden more recently. During the 1920s even though growing produce was more important, there was still an important leisure function for the gardens. The site is considerably overgrown, however at least seven summer houses survive in varying stages of decay. Most are brick built with tile roofs; wooden panelling survives internally in some. Several mature fruit trees survive, some of which may be those planted by around 1866.

2 At the end of the 18th century, many large, cramped towns had a ring of small rented pleasure gardens on the edge of the built up area. Hill Close Gardens represent a rare survival of such gardens, though much altered. In the earlier 18th century, the site was a field called Hilly Close. It was divided into gardens in 1845 by Edward Wilso of Exhall and was one of several similar plots of gardens around the town. It was known as Hill Close Gardens by 1851, though it was not fully laid out by then. Plot division was completed in 1866, when the freehold of the area was bought by Mark Philips of Welcombe. There were 32 plots and several access lanes. The freehold of the plots was sold off piecemeal over the following years, and from the early 20th century onwards the gardens were gradually encroached upon. A reduced area survives, containing several mid to late 19th century summerhouses, as well as a bothy and a pig sty. Register description contains further detail.

3 A Tuscan-style sandstone column base was recorded in a spread of stone rubble close to the garden entrance in June 2006.

4 Lovie reports presence of bowling green. Two earlierst pavilions hesagonal in plan; site in divided ownership and poor condition at the time of his report (1996/7).
He comments that there is a move to form a residents’ group to conserve the site and buildings.