You are here: Home>Locations>Chesterton>Gateway to Chesterton House 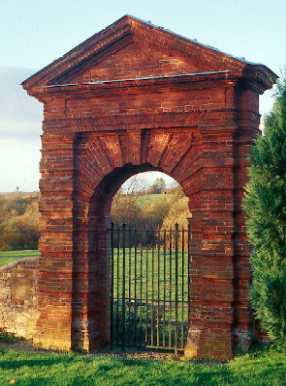 The gate way in a church wall that was built in the Post Medieval period. The gate way led a path from the church at Chesterton to the manor house which was demolished in 1802.

1 The only relic of the Peyto mansion is a gateway in the S wall of the churchyard, of red brick with rusticated round arch and flanking pilasters that support an entablature and pediment.
2 The gateway is actually on the N side of the churchyard. It is still standing and a plaque shows that it was repaired in 1933.
3 Descriptive text.
4 An excavation was undertaken in December 1989, which revealed the remains of a flight of brick steps leading up to the gateway. The site archive is in WMBFI 796.
5 Excavation notes.
6 Brick pedimented gateway in churchyard wall, originally leading to a path up to Chesterton House. Recently restored by English Heritage. Noted as a fine example of 17th century garden architecture (p86).
7