You are here: Home>Locations>Dunchurch>Deserted medieval Settlement at Cawston 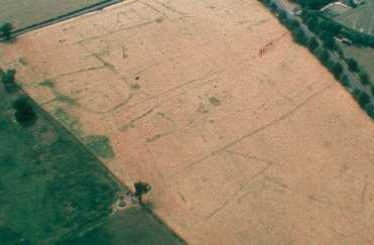 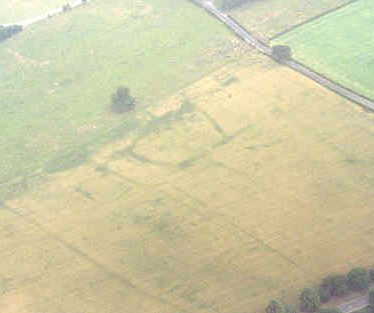 Linear features, a trackway and enclosures of unknown date are visible as cropmarks on aerial photographs. The features suggest that this might be the remains of a settlement. Verified by excavation. Occupied 12th & 13th century, deserted/shrunken by 15th. Thought to be a manorial complex or grange of Pipewell Abbey. The site is located at Cawston.

1 AP.
2 Undated crop mark complex consisting of a central trackway, enclosures and linear features shows on aerial photographs.
3 Contains elements of a type that could be either later Prehistoric or RB. However, area context makes Iron Age date more probable.
4 Excavations by Stuart Palmer of Warwickshire Museum field Services. Examined an area where topsoil stripping ran through crop marks to the south of the modern village. An enclosure with three buildings was revealed. Two were of stone with a flimsy timber structure between. Finds included charcoal and burnt soil containing a significant quantity of iron nails. Medieval window glass also recovered. Thought to possibly represent a manorial complex or grange of Pipewell Abbey. On north side of enclosure remains of a smithy revealed. Post built structure also revealed in this area, possibly associated with the smithy. Pottery suggests occupation during the 12th and 13th centuries and desertion or shrinkage in the 14th/15th century. Accords with documentary records of enclosure by Pipewell Abbey before 1486. Enclosure ditch also of this date. Other cropmarks (I.e. track) can be dated to this period by association.
5 Features associated with the southern most extent of the DMV was recorded in evaluation.
6 Features not identified through NMP visible on 2013 AP layer.