You are here: Home>Locations>Coleshill>Church of St Peter and St Paul, Coleshill 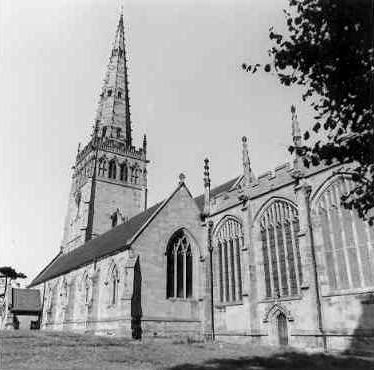 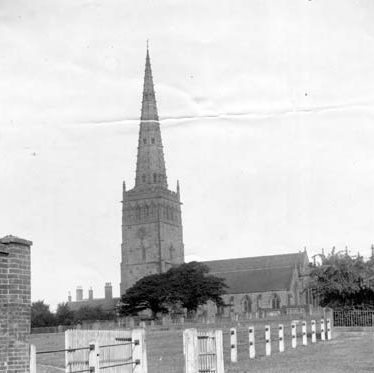 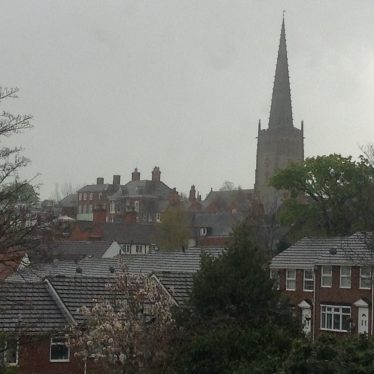 The Medieval parish church of St. Peter and St. Paul which is located 100m east of High Street, Coleshill.

1 Mainly C14-C15. Chancel, nave, N and S aisles and porches, and W tower with spire. Rich in detail but severely restored 1868. Important monuments and C12 font.
2 There was a priest here in 1086. The earliest surviving parts, the four E bays of the arcade, date from c1340. The W tower was built c1440, and its spire was rebuilt in 1550 and again in 1888. The font is mid to late C12. The bowl is cylindrical and its side is carved with panels. The widest, towards the E, contains the Crucifixion; a large ring pierced with small holes or dots surrounds our Lord and crosses over the lower part of the figures of our Lady and St John. The other nine panels are narrow and are divided by pilasters with scalloped capitals supporting semicircular arches. Four of them contain low-relief carved standing figures of nimbed saints. The other five alternate panels are filled with scrolled foliage. The stem has a moulded top member of C14. The base is hollow-chamfered and changes to octagonal plain in the lower half.
3 Norman foundations were seen within the Decorated arcade during excavation.
4 Photo.
5 E part of nave arcades C14, chancel rebuilt C15, E wall restored 1907. Heating ducts – N aisle/nave/S aisle. C14 tombs – N and S walls; C16, C17, C18 grave markers in floor. Chancel raised above original floor level, which is shown by N and S chancel doors – steps up. Potentially excellent survival of earlier floor levels in chancel. Nave may be extensively disturbed by graves.
67 An archaeological observation during the installation of floodlights at the church uncovered some of the church foundations and part of a single grave. The cable trenches also revealed that concrete had been poured to a considerable depth around much of the western end of the church.
8 As an important royal centre in the Anglo-Saxon period, Coleshill was a logical place for a pre-Conquest minster church, the church being the centre for the Deanery of Arden, which may have roughly corresponded with the Coleshill Hundred extent. It is possible that the minster evolved into the Parish church.
9 A locally-produced guidebook to the church.