You are here: Home>Locations>Curdworth>Church of St Peter and St Nicholas, Curdworth 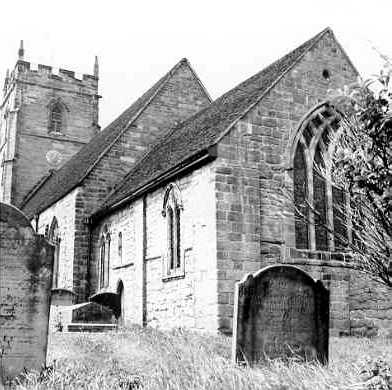 The Church of St. Peter and St. Nicholas which has its origins in the Medieval period. Parts of the church were restored during the Imperial period. It is situated on Church Lane, Curdworth.

1 Chancel, nave, S porch and W tower. The chancel and E portions of the nave are 12th century with some 14th century features. The W portions of the nave and the tower with embattled parapets are 15th century. The porch is 15th century, largely restored in 1800.
3 Font is Norman, round strong and barbaric.
4 Watching brief carried out to observe the excavation of electricity cable trenches. Trenches located along the south and west sides of the church. No significant archaeological features observed.
5 Archaeological Observation of cable trenches did not identify any archaeological features.
6 1895-6 restorations – all of walls underpinned, trench dug around church for this. Font and stone coffins found under nave floor during restorations. Churchyard extended to W 1918-19. Grave found outside N wall of church – with shoes on. Rectangular platform in field to the S – early manor house site? 14th century floor tiles found in 19th century restoration. Probably major disturbance of interior surfaces during 19th century restoration and below -floor survival therefore poor. However, rectangular platform extends into churchyard and is of major archaeological potential.
7 Archaeological observation and recording was carried out during groundworks in the vicinity of the church. A series of foundations and butresses, dating from the 12th to the 15th centuries were recorded. The earliest foundations recorded belonged to the mid-late 12th century chancel. The later foundations of the late 15th century bell-tower, nave and south porch were also recorded. Two inhumation burials were also recorded, probably pre-dating the construction of the bell-tower. The NE-SW alignment of the burials is probably a result of overcrowding in a favoured area of the churchyard.