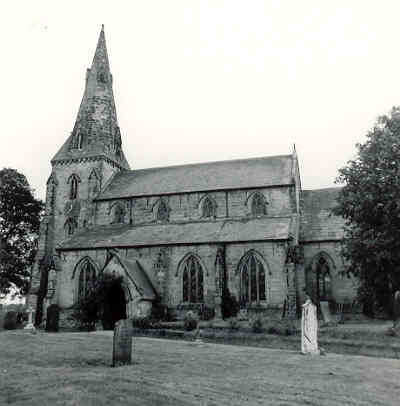 The church of St Nicholas which was built in the Medieval period. It is situated on Church Lane, Austrey.

1 Chancel, nave, N and S aisles, S porch and W tower with spire. The tower is 13th century; the remainder was rebuilt and enlarged c1330. Chancel restored and S porch rebuilt 1844.
2 Photos of the exterior and of the Chancel.
3 Except for the tower, the church is early 14th century and all of a piece, to a degree exceptional in the county. The tower has typical late 13th century windows.
6 Photographs.
7 The footing of a stone wall was observed during groundworks in March/April 1993 on the south side of the tower. This may represent the remains of an earlier tower or an earlier church layout (see FI file for details).
8 Former roofline is evidence for earlier building attached to tower. Heating ducts possibly along centre of nave (covered by carpet), modern tiles in nave possibly overlay earlier floor levels. External drains along N, E and S sides. Ridge and furrow and a small ridge in field to N of graveyard extension. Probably good survival of below floor deposits.
9 Further observations were made on the south side of the tower during the erection of scaffolding in January 1994.