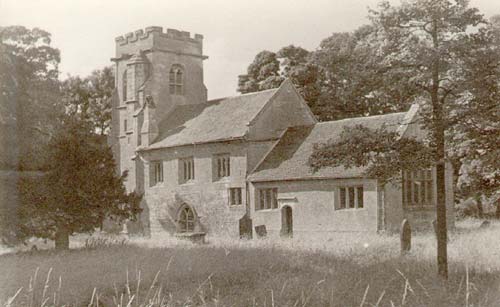 1 Chancel, nave, and W tower. 13th century nave. W tower built about 1500 by Nicholas Brome; clearstorey added at the same time, and it was probably then that the chancel arch was inserted. The chancel is said by Dugdale to have been lengthened in 1535, but it was entirely rebuilt in 1634 by Edward Ferrers. The 16th century E window was retained. 15th century or 16th century font. Altar-tomb in chancel to Sir Edward Ferrers (d1535) and family. Oak screen dated 1634 in the chancel arch. Mentioned as a chapel in 1221; it had become an independent parish church before 1298. Formerly dedicated to St James.
2 Plan of the church.
6 Burials of lords of Baddesley in floor, in centre of chancel. External drains around exterior. Ditch on most of churchyard boundary. Probably good survival of deposits in nave but extensive disturbance by burials in chancel.
7 Church leaflet.