You are here: Home>Locations>Whitchurch>Church of St Mary, Whitchurch 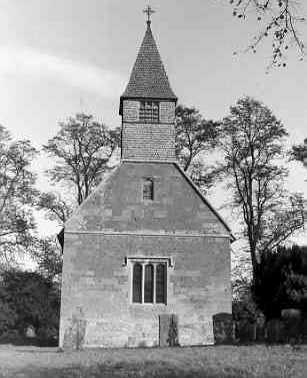 The Church of St Mary dates back to the Medieval period, although alterations to the building were made in later periods. The church is located 300m to the west of Alderminster.

1 Chancel and nave with bellcote at W end. The W half of the nave is about 1m wider than the E half and is undoubtedly the earliest part, probably late 11th century. The E half may have been the early 12th century chancel, in which case the W half, as the original nave, must have extended much farther W than it does now. Late in the 12th century another chancel was added, and this was lengthened in the 13th century. It was remodelled at the end of the 15th century, when the fine E and side windows were inserted. Much repair done in the 17th century; it was probably then that the nave was shortened and the present W wall built. The reset Norman doorway in the S wall was most likely in the original W wall. Other repairs and restorations in the 18th century and later. Nave roof probably 17th century, chancel roof modern. A 15th century tomb and some late 15th century glass in the chancel. Bell of c1350.
2 Plan of the church.
3 Photograph of the interior.
8 An Anglo-Saxon carved stone, probably a grave-slab, is set flush into the west wall of the nave.
9 Observation revealed a substantial wall foundation 10m west of the church. This most probably formed the original west end of the Norman nave prior to its shortening in the 17th century. In the soil over the wall there was a limestone block carved with late Anglo-Saxon interlace decoration that had been reused as a plinth. Outside the existing west end of the church part of the floor of the medieval nave, consisting of monochrome green and yellow glazed tiles survived in situ.

email
More from Whitchurch
More from Chapels and Churches