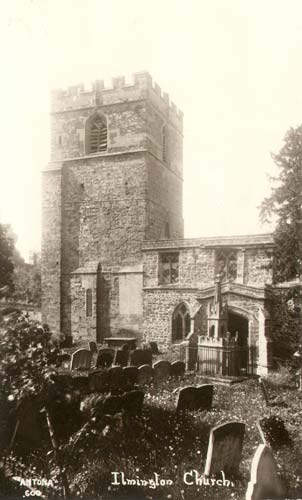 The Church of St Mary, which was originally built during the Medieval period. It is located 100m south of the Fish Ponds, Ilmington.

1 Chancel with small N vestry, nave, N and S transepts, S porch and W tower. Dates from the mid 12th century, when it had a chancel and nave of the present size. W tower added later in the 12th century. Chancel rebuilt early 13th century. N transept appears to have originated in the 13th century as a chapel, but was apparently enlarged in the 15th century. The S transept was probably added then, but has been almost rebuilt in modern times (1846?). Mid 14th century clearstorey to nave. Top stage of tower added in the late 15th century, S porch in the early 16th century. Church rather drastically restored in 1846. Further repairs in 1911 and 1939. Font probably early 16th century. A badly worn stone effigy of a priest, probably early 15th century. Monuments of the 16th century onwards. There was a priest, implying a church, at Ilmington in 1086.
2 Plan of the church.
3 Photograph of the chancel arch.
4 Basically a Norman church. The N and S doorways show this, also the Norman windows to the E of the two doorways, and the chancel arch, which though much recut is Norman too. The nave is remarkably wide.
6 Noted by Ordnance Survey.