You are here: Home>Locations>Cherington>Church of St John the Baptist, Cherington 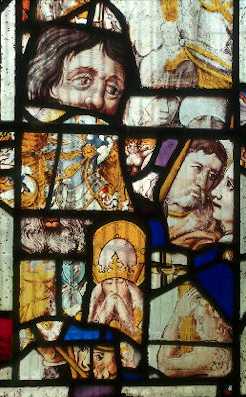 1 Chancel, nave, N aisle, S porch, and W tower. Early 13th century nave; the chancel with it was probably rebuilt entirely, widened and lengthened, late in the century, but there has been a great deal of restoration and repair to it since, including the rebuilding of the S wall. The N aisle and arcade and the lower half of the tower are additions of the late 13th century. Clearstorey and nave roof and upper half of tower added in 15th century. Early 14th century S porch. Chancel arch probably of c1500. Restorations in the 16th century and later centuries, known dates being 1877, 1909, and 1917. The organ recess N of the chancel is the work of one of these last two periods. Unusual early 14th century tomb and effigy of a franklin. Fragments of stained glass, mostly 16th century, acquired by an 18th century rector.
2 Plan of the church.
3 Photograph of a tomb.
4 Much of the church is of the 13th century: the simple S doorway, and then, probably later, the chancel E window, one nave S window, and the N aisle E window. They are all varieties of the type of three stepped lancets or lancet lights. The N aisle N windows seem contemporary at first sight (Y-tracery), but the details betray a date late in the 18th century. With this date go the parapet and the funny obelisks with blank quatrefoils. The same are on the tower, which was begun before 1300 (arch to the nave of three continuous chamfers). Much stained glass, all in fragments, from many sources, and dating from the early 14th century to the 18th century. Nearly all was collected by a rector of c1750-60.
5 Listed Building description.
6 Information from the PCC about the replacement of the 1842 bellframe by a steel one in order to accommodate a sixth bell.