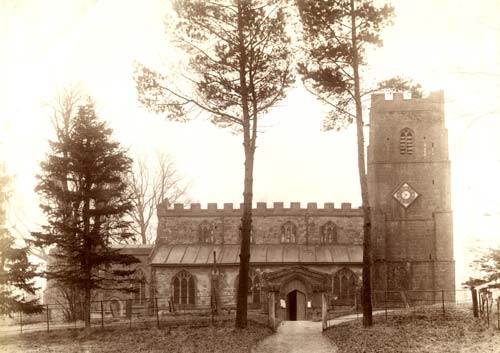 The Church of St Botolph, built during the Medieval period on the site of an earlier church. Some rebuilding work and alterations were carried out during the Imperial period. The church is situated 100m south of Main Street, Newbold on Avon, Rugby.

1 Chancel, nave, N and S aisles, N and S porches, and W tower. Of 15th century date, built on the site of an earlier church, indicated by an exposed portion of an early 14th century tiled floor 8 cm below the present level of the nave floor. Chancel was rebuilt in the 19th century, a parapet was added to the S aisle and the whole church reroofed. Sandstone and limestone rubble with sandstone dressings, the chancel rebuilt in sandstone ashlar. The church is recorded in the 12th century.
2 Drawing of c1820.
3 15th century N door. Uncommonly plentiful funerary monuments, chiefly of Boughtons of Little Lawford Hall, from the 15th century onwards.
5 Noted by Ordnance Survey.