You are here: Home>Locations>Grendon>Church of All Saints, Grendon

Church of All Saints, Grendon 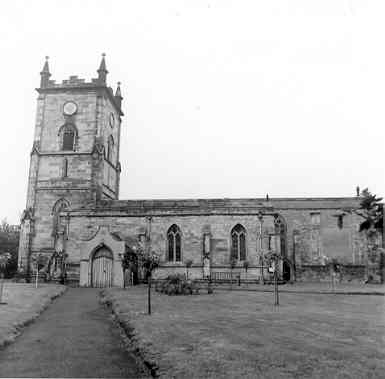 The Parish Chuch of All Saints, which was originally built in the Medieval period. It incorporates later additions to the building which were made in the Imperial period. It is situated 100m southeast of Grendon Park.

1 Chancel, nave with unequal aisles, modern S porch and modern W tower. Of C12 origin. The chancel is C13, with 16th century clerestory, and the nave is 13th -14th century. The porch is dated to 1820, and the tower is mid 19th century. A number of interesting internal monuments and fittings exist.
4 Photographs.
5 S aisle and S arcade 14th century. Heating ducts – N end of nave and possible chancel & S aisle. External drains – trench around outside, cut below plinth; extra plinth at E end of S aisle. Well-marked house platforms to E and S of graveyard extension. Medieval pottery in E border of graveyard extension. Extension possibly cuts into platforms. Possible platforms visible in graveyard extension itself. Bank on E side of original churchyard, with corner at N end. Interior of church probably heavily disturbed by graves. Survival of below-floor deposits likely to be patchy. Any ground disturbance or further extension of graveyard to N, E or S to be avoided as this would affect well-preserved earthworks which are probably part of a deserted settlement.

email
More from Grendon
More from Chapels and Churches