You are here: Home>Locations>Warwick>Chapel of St Peter, Eastgate, Warwick 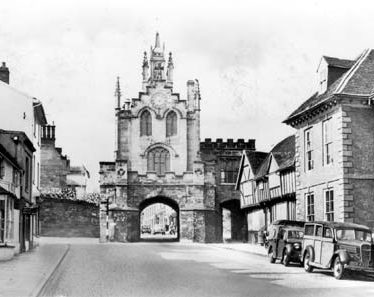 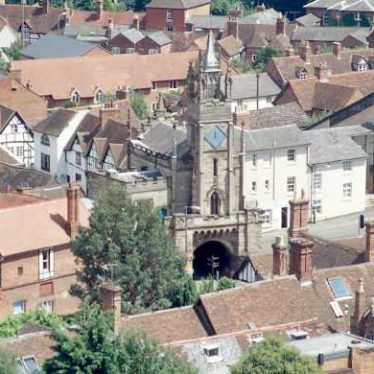 Eastgate and the Chapel of St. Peter, Warwick
Warwickshire County Council
Description of this historic site

The Chapel of St Peter, a chapel of Medieval origins built above the Eastgate, Warwick. The present building mostly dates to the eighteenth century. It is at the west end of Smith Street, Warwick.

1 The East Gate was probably reconstructed in the early 15th century, when the chapel of St Peter was built above it. In 1576 the chapel was acquired by the corporation, having been described as ‘ruinous and ready to fall’. In 1788 it was rebuilt in the Gothic style by Francis Hiorn. A view of 1773 suggests that the the main lines of the 15th century chapel were followed at the rebuilding, but that various embellishments such as tall pinnacles and crenellations were added. The present building resembles a miniature church, raised above the gate on a platform with an embattled parapet. The small W tower is surmounted by angle pinnacles and a wooden turret. The main part of the building is divided into two storeys. In the early 19th century there were two schoolrooms on the lower floor and apartments for the master and mistress above. Another schoolroom to the N, evidently rebuilt in the Gothic style in 1788, may have formed a small transept to the original chapel. The buildings are now part of the Girls’ High School. The chapel of St Peter is first recorded in 1123.
2 Drawing of 1773.
3 The upper W doorway of the original chapel remains.
6 Schedule information.

Linkedin
More from Warwick
More from Chapels and Churches