You are here: Home>Locations>Warwick>Chapel of St James, Westgate, Warwick 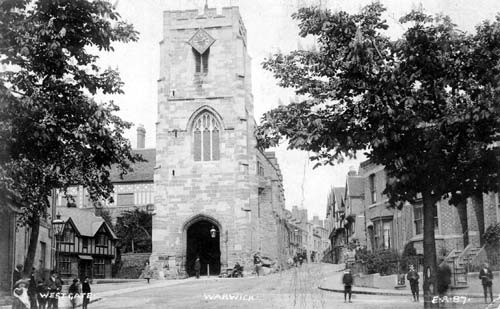 Westgate with the Chapel of St. James above, Warwick
Image courtesy of Warwickshire County Council, 1900s
Description of this historic site

The Chapel of St James, Westgate, Warwick. Its Medieval origins are known about from documentary sources. It was rebuilt in the 18th century and again in the 19th century. It still forms part of the Lord Leycester Hospital.

1 The West Gate (PRN 1925) appears to have been reconstructed in the late 14th century together with the chapel above it. Both were extended W early in the 15th century when a tower was added to the chapel, its base being pierced by the main entrance arch to the gate. By 1565 the chapel had begun to fall into ruin and in 1571 it was granted to the Earl of Leicester so that he might found his hospital there, of which the chapel still forms a part. Later restorations have destroyed almost all the original features in the body of the chapel. It was largely rebuilt in the 18th century and re-roofed and completely restored by G G Scott in 1863-5. His work included a new E window, the windows in the side walls, and the rebuilding of the former parapet walks along the S and E sides, the former spanned by five flying buttresses. During the restoration the stones of a 12th century arch were found under the floor and were re-erected in the master’s garden at the hospital. There are no internal fittings dating from before the 19th century. The chapel of St James is first recorded in the 12th century.
4 Listed Building description.