You are here: Home>Locations>Warwick>Castle Bridge, Warwick 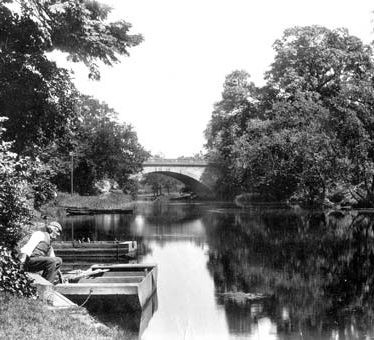 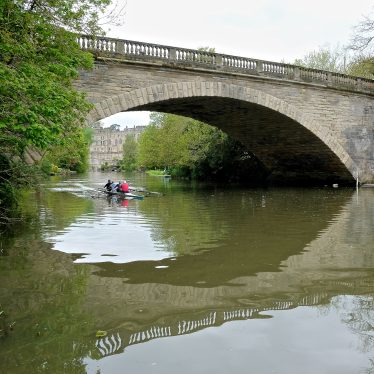 Castle Bridge, a sandstone bridge built in the Imperial period. It has a single span of one segmental arch with Classical balustrades. It crosses the River Avon 400m east of Warwick Castle.

1 Good 18th century ashlar (sandstone) bridge. Single span of one segmental arch with rustications continued through the soffit. Monumental balustrade with curved terminations on plan at each end, and heavily moulded string course below. Part of the balustrade on the down stream side was damaged during the 1939-45 war. It has been replaced.
2 In 1788 the Earl of Warwick obtained an Act of Parliament which enabled him to build a new bridge. The first stone was laid in 1789. The same basic design as the Leafield Bridge seems to have been used. The parapet consists of conventional Classical balustrades. The new bridge was opened in 1793. It cost at least £3258.
4 Scheduling information.
5 A trial trench was excavated across the bridge in 1997 and archaeologically monitored. It revealed the structure of the bridge at the apex of the arch. It also showed that the original infilling of the bridge had been heavily disturbed by service trenches and that no earlier road surfaces survived.
6 Drawing of the bridge under construction in 1791-93 by Henri-Roland Lancelot.
7 Archive of trial pits in 1991.

email
More from Warwick
More from Bridges and Viaducts
More from Streets, Roads, and Railway Tracks