You are here: Home>Locations>Radway>Henry Valentine Mills. A Marriage License for Radway 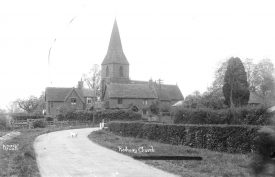 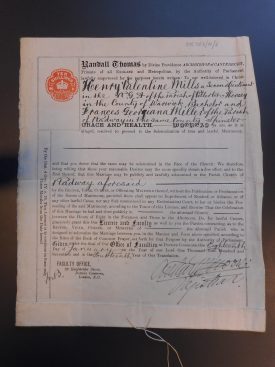 This marriage licence is for the very aptly named Henry Valentine Mills and his spouse Frances Georgianna Miller. It dates from the 18th January 1917 and granted the couple permission to marry. In this instance the couple were permitted to marry in the parish of Radway, Warwickshire (the bride’s home parish) within three months of the date of the licence.

Henry’s occupation is listed as a Second Lieutenant in the Royal Garrison Artillery. They were obviously keen to marry quickly, as they paid for a licence rather than have the banns read on three consecutive Sundays in the church. The licence was granted by Thomas Randall, the Archbishop of Canterbury.1

Marriage licences are documents which permit a couple to marry. They were first introduced in the 14th century and allowed a couple to bypass the reading of banns on three consecutive Sundays, in exchange for a fee. Despite their expense, they proved popular, and it is estimated that by the early 18th century, about a third of marriages were conducted by licence.2 They were particularly useful for a couple who wished to marry quickly and avoid the delay caused by the reading of banns. They were also used as a status symbol, due to the higher cost.

Before a licence could be granted, the Groom would usually have to swear an affidavit (called the allegation).

In this instance, the licence was possibly granted due to Henry’s occupation. In 1917, the First World War had been raging for three years and as a Second Lieutenant, he was likely serving his country. This would mean he had little leave in order to marry.

Henry was born in 1881 to Francis and Selina Mary Mills. His baptism took place in the parish church of Pillerton Hersey, Warwickshire on 1st January 1882.  On the 1911 census, he is still living at home with his parents, three sisters and four servants.3

He married Frances Georgianna Miller on the 27th January 1917 at the Parish Church in Radway, St Peter’s.4

Tragically, just a few months later, Henry was killed in action. On the 25th June 1917, just outside Ypres, 321st Siege Battery came under fire and amongst the casualties was Henry Valentine Mills. He is buried at Vlamertinghe New Military Cemetery, West-Vlaanderen, Belgium.

3 See the records on ancestry.co.uk

Linkedin
More from Radway
More from Births, Marriages and Deaths